Above One of various US government photographs from World War I of the American Women’s Camouflage Corps. A few years ago, we curated and designed a public exhibition of this and other photographs from the same unit. All items from that exhibit can now be accessed online.

Below are the sketches and humorous captions by Thelma Cudlipp for a satirical treatment of the same subject from a 1918 issue of Vanity Fair magazine. The artist/author was the American illustrator Thelma Somerville Cudlipp (1891-1983), who, through marriages and family links, is also sometimes known as Thelma Somerville Grosvenor Cudlipp Whitman. Having led an undoubtedly interesting life, she merits looking into.

Thelma Cudlipp (sketches and text), "Camouflage! Oh, Where Have We Heard That Word Before?", from Vanity Fair, September 1918, p. 35—

ISN'T IT WONDERFUL how the very most fashionable women in America are helping to dethrone that whole darn Hohenzollern family? And isn’t it wonderful, too, to note the variety of activities in which their energies are beginning to count for the Allies? Take, for instance, the Women’s Camouflage Corps, of New York, which is doing such wonderful work up in the Bronx! Why, it really isn' t possible—because of the work of the corps there—to walk in the northern confines of our city without acknowledging the truth of the saying that "Things are not what they seem." It was obvious, from the beginning of the war, that the ladies would flock to the art of camouflage, as if drawn to it by some natural inherited instinct. For, is a woman—we ask you—ever as happy as when she is persuading us that when she offers us one thing, it is, in reality, another? And so, when the vogue of camouflage came along and gave the girls an opportunity to resort to their favorite occupation of dissembling, why, that's all there was to it. The incidents mirrored on this page are the results of recent and actual experiences on the part of Vanity Fair. 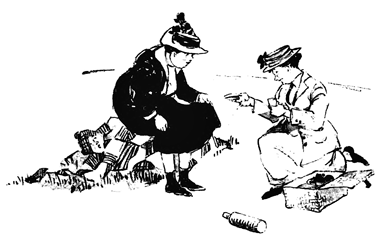 Here is a rather saddening incident. Private Phylisse Stuyvesant has, for a week or more, been annoying her sister members of the Camouflage Corps in a great variety of ways. All of the girls have been doing their best to “sit on her”—but so far, without success. Here, however. we see the snub actually accomplished—not by the girls, to be sure, but by a vagrant cook, who, with a strolling laundress, is out for a little alfresco picnic. 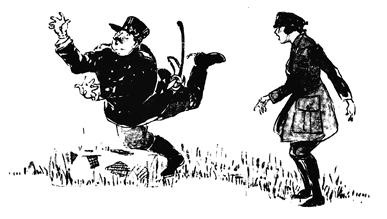 Horrid predicament of Lieutenant Corinne de Puyster, who is acting as guide and cicerone for a French General of note, who has graciously consented to visit the Ladies Camouflage Camp. Lieutenant de Puyster, determining, inwardly, to give Sergeant Esme Vanderbilt at least ten days in the guard-house for having camouflaged her Sherry's lunch basket so as to make it appear to be but an innocent and inoffensive bit of the parade ground.

And here is a really tragical incident, as a result of which Vanity Fair almost went without its accustomed liquid refreshment on its recent visit to the ladies' camp. The girls had camouflaged a case of Bevo [near beer] to look like a cross-section of a rocky pasture, with the distressing result that it took three privates in the ladies' corps upwards of twenty minutes to find the precious fluid. The discovery of it was only accomplished by implicit obedience of the terse orders: “Ladies! Forward on all fours.” 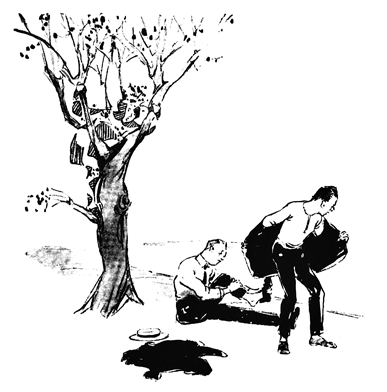 So many people are saying that Vanity Fair is an improper magazine—what with its troupes of barefoot dancers and its portraits of the girls in the Follies—that we hesitated a good deal before printing this rather questionable illustration, displaying, as it does, two gentlemen about to take a swim in the river Bronx, all unaware of the fact that Captain Gladys Astor is lurking, not more than five paces away, cleverly disguised as a stunted nut tree. 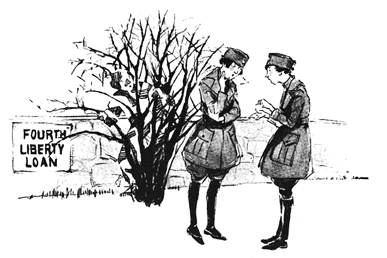 And this is what led to the very biggest scandal of all, a tragedy so tremendous that it led to the withdrawal of Major Muriel Van Rensselaer from the Camouflage Corps. The Major, disguised as a sassafras bush, was, all unwillingly, forced to overhear a lengthy, candid and snappy account of herself and all her activities—just exactly what all the girls really thought of her—from two horrid privates in her own company.
Posted by Roy R. Behrens at 12:39 PM