The Bystander | Disguised to look like nothing at all 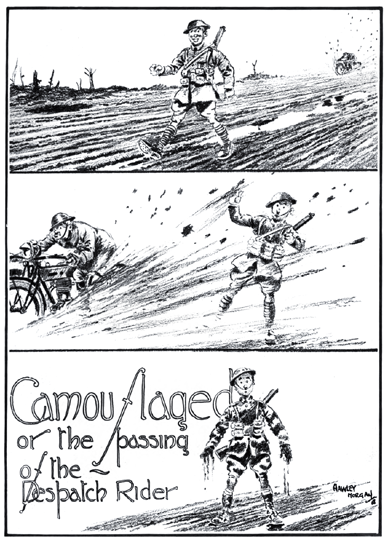 Of late the scene painter's art—technically known as camouflage—has raised the concealment of batteries and their observation posts to the realm of the uncanny…you can now disguise anybody as anything. For instance, you can make up a battery of six-inch guns to look [like] a flock of sheep, and herd them into action browsing. Or you can dispatch a scouting party across No Man's Land dressed up as pillboxes, so that the deluded Hun, instead of opening fire with a machine gun, will merely post letters in them—valuable letters, containing military secrets. Lastly, and more important still, you can disguise yourself to look like nothing at all, and in these days of intensified artillery fire it is very seldom that nothing at all is hit.
Posted by Roy R. Behrens at 11:11 AM