Eyewitness | WWI dazzle ships not what they seem 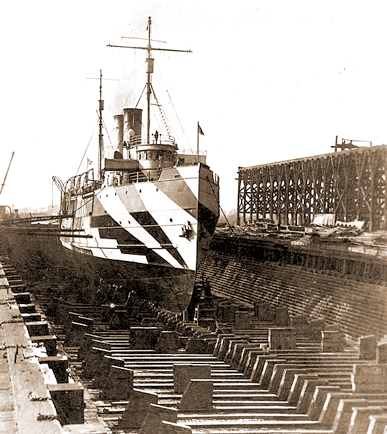 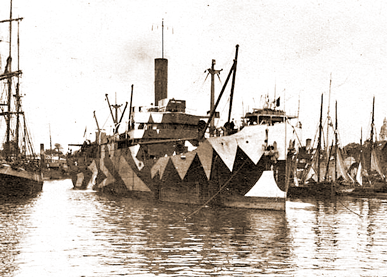 Kate Burr, CAMOUFLAGED SHIPS: WHAT THEY SEEM THEY ARE NOT, in Buffalo Times (Buffalo NY) September 4, 1918—

I have seen some of the camouflaged ships which the Government has had painted for war reasons. They were a mile from where I was looking at them, but the glasses were good and brought them near. The three I saw were each one different from the others and gave a different effect to the observer.

For instance, the first of the boats looked like three fastened together and built in some strange elemental fashion with the bow higher than the keel and the middle bulging far over the sides.

It was not any of it so—all the work of the consummate artist in perspective who did the painting.

A little way off the casual onlooker was unable to tell whether the boat was “coming or going.”

The second ship presented the appearance of a battleship bristling and threatening.

The third ship sailed majestically out of the river and so much painted drapery was shown along her sides that I was minded of Tennyson’s Elaine on her flower-decked bier sailing home for her burial place.

The camouflage was complete.

Nobody could tell what was vulnerable, nor what was important, nor where the guns were placed—for though this is a vessel for common carrying, she must be armed we know.

The white body was strangely decorated with blue painting and gray painted, and what was shadow and what was blue water, and what was construction no human eye could determine by its naked strength nor with the help of strong lenses.

It was all wonderful—this camouflage of vessels—this blending of atmosphere and sea and sky.

Turning away in admiration, my eyes sweeping the shore line, discovered an object which lent a little ray of humor in this grim paraphernalia of war.

At one of the private docks belonging to the cottage community was tied a sort of craft which brought us to smiles.

It was a small floating structure about the size and shape of a bathtub, painted in “battleship gray.”

At first sight that was all—but—and then the smiles grew deep—along the sides were wide markings of blue and gray—stripes and festoons and circles and oblongs.

Some imitative lad of seven or ten had persuaded his Daddy to furnish the paint and ingenuity had accomplished the rest.

No warring enemy submarine will seek out this protected craft, which is surely a merchantman—carrying supplies from the mainland to a fairy island where busy and saddened people congregate to forget war for a few brief days before getting into the thick of work for their boys and their government again.…
Posted by Roy R. Behrens at 9:19 AM