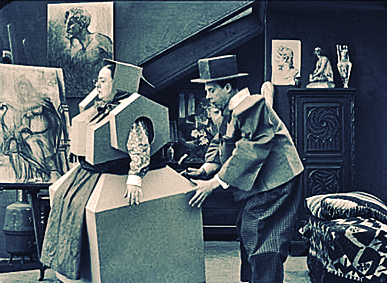 The camoufleur is having engagements at this port changing the appearance of the local fleet of steamers that enter the war zone declared by the U-boats on this coast. One arrived yesterday from the south so completely disguised by the cubist artist as not to be recognized by agents of her line. Others belonging here are being camouflaged.

Little is seen or heard nowadays about the writers of vers libre ["free verse"] or the cubist artists. Maybe they have gone where they belong—to Camouflage.

Cubist, surrealist, modernist, futurist, realist, and naturalist painters who once cluttered Montparnasse terraces are in the army as camouflage artists.

Canvases and theories have been put aside. Long-haired, bearded, shabbily-dressed dreamers have left attics to become clean-shaven, neatly-dressed army men.

"The cubist painters' angular pictures often are the most confusing thing in art to the layman and they are the most talented to turn out camouflage which will confuse the enemy."

"White outs," a system of confusing enemy planes by careful illumination and reflections, would be much more effective than black outs, he declared.
Posted by Roy R. Behrens at 11:47 AM