Despoiled ship shape: only a seagull fouls a deck 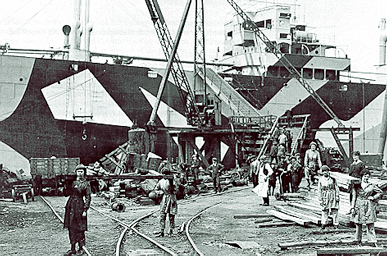 …There is a story of one naval officer who, when the painting of the decks of his ship was proposed, turned indignantly on the camoufleur, saying: "What, foul the teak of my decks! Only a seagull has the right to that, sir."

Officer Ford found a man clothed in pajamas promenading on Sharp Street at two o'clock the other morning.

On being accosted the man was startled, and then explained that he was a somnambulist.

STORIES OF INTEREST: A Cubist Puzzle in the Los Angeles Herald. November 12, 1917—

The wife of a well known cubist artist was returning from Spain to France. The customs officer opened her baggage and discovered a remarkable canvas. The picture appeared to represent a collection of old iron, which had been strongly colored. The officer gazed with astonishment, mingled with suspicion, at the work of art. "That's my portrait," said the lady coldly. "Never!" returned her examiner. "That must be the plan of a submarine or airplane." An engineer as expert was called. He looked at the masterpiece for a long time and turned it round and round. Finally, he said, "It is possibly a machine, but it will not explode." On this the lady was allowed to depart.
Posted by Roy R. Behrens at 4:54 PM