Achtung! Beware of another camouflaged dog! 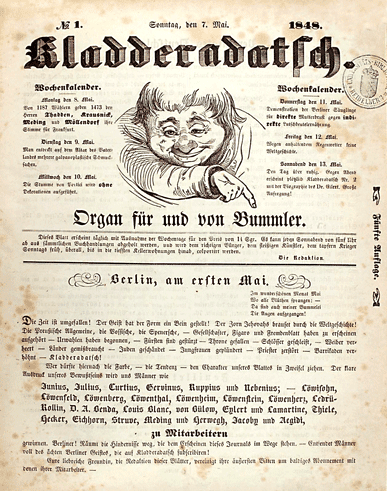 Above This is the cover page of the inaugural issue of a German satirical magazine called Kladderadatsch. It was founded 1848 in Berlin by David Kalisch and Albert Hofmann. There is a story (true or not) that Kalisch and the magazine's staff were having dinner one evening, in part to reach an agreement about the name for the magazine.

During dinner, a dog knocked over a stack of plates, at the sound of which someone at the table said "Kladderadatsch!" which is the German sound for "Crash!" Kalisch loved it (one wonders if he was inspired by the French magazine Le Charivari, meaning "street noise" and/or The London Charivari) and decided to use that expression as the magazine's name.

In the top center of the cover is a drawing of a smiling boy (see below) by Wilhelm Scholz, in which, in tribute to the noisy dog, there is a drawing of the dog hidden (camouflaged, embedded) in the boy's cheek to the left of his nose. That same drawing continued to be on the cover for forty years.