Nearly ten years ago, in a blog post titled Who Invented Dazzle Camouflage?, we noted a few of the people who, during and after World War I, claimed to have been the first to propose disruptive or “high difference” camouflage, commonly referred to now as dazzle painting.

Ten years later, we continue to find competing claims. Quoted below, for example, is an excerpt from a 1939 article in a Lancaster PA newspaper, which reported that WWI disruptive camouflage was inspired by an interview (which we have yet to find) in 1916 with Howard Thurston, a famous American magician. 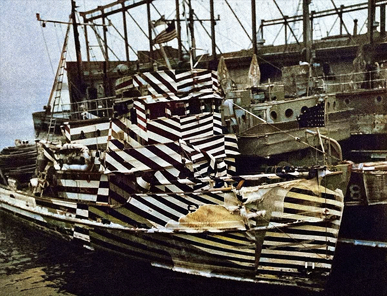 …Lancaster remembers the [First] World War years when local inventors were tinkering with odd gadgets and everybody with an old paint brush was experimenting with the technique of camouflage.

Corn cribs and outhouses and garages for miles around were streaked and blobbed with swearing color while warring nations were still pooh-poohing “dazzle-paint,” and just learning the rudiments of camouflage in brown-painted and branch-decked gun emplacements.

Lancaster had used up gallons of vari-colored paint before a single warship was docked for a camouflage job.

It all started in 1916 when Howard Thurston, the great magician, gave an interview while in Lancaster saying he thought the “illusion” of the magician could well be used in protecting ships at sea from submarines.

Lancaster liked the idea so much that every amateur magician with a couple of cans of paint and a little imagination immediately went to work hiding his tool shed from the neighbors with outlandish stripes.

Curiously enough, the idea wasn’t put to use until submarine warfare hit its peak in the middle of 1917. The seemingly meaningless experiments in Lancaster were suddenly formulated into real scentific formulas which successsfully deceived U-boat commanders about the size and course and speed of ships.

It didn’t seem reasonable that bright stripes would be less conspicuous than an even dull gray. In fact, they aren’t. But they do distort the appearance of a vessel so that its ordinary outlines are as completely hidden as a length of spaghetti in a can of fish worms.

When it finally did get going, however, England and then the United States set up “Dazzle Departments,” and by the end of the war some 4,000 merchant vessels and 400 warships were sporting stripes.

But futuristic barn-door art wasn’t the only contribution Lancaster made in the direction of life-saving in wartime.…

Many wartime ideas that actually worked out—camouflage, for one colorful example—looked at first like the sketches on the wall of the booby hatch. But history agrees that there’s never been an invention that’s crazier than war itself.

Lancaster PA—A resident reported her automobile stolen from in front of her home. Police found it where she had parked it, but buried under a snow drift after a heavy snow.