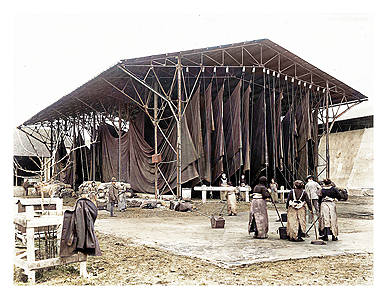 Behind American lines somewhere in France. Seven hundred French women are employed in the American Camouflage station here making nets to screen from observation American batteries and machine gun sections. There was a burst of patriotic song as the Associated Press correspondent entered the large building where they work, for many of them sing as they sew.

The screening of artillery is the most imporant work of camouflage, as it is the main reliance in deceiving the aerial observer and camera and in preventing the enemy from locating our batteries.

For this purpose huge camouflage nets are provided of wire and fish-net, which cover the guns like a great horizontal tent. In the netting are tied bunches of green burlap, of the same color as the surrounding grass or foliage. And thus viewed from above, the overhanging green net merges the battery into the landscape of trees and turf.

Hundreds of these nets were being made by the women workers. The 75 millimeter takes an overhanging net, 30 feet square, the 165 millimeter gun has a 37 foot net, and the American machine gun gets an 18 foot net. The nets are graded inten colors of green and earth-brown, so that the shield may have the exact tint of the surrounding trees. The nets are shipped to the front in huge bundles, one for each gun.

It has been a problem to get the 700 women required for this deft work on the nets, and one of the chief means of drawing them is a Red Cross home for the babies of the married women, and a YMCA kitchen which gives them a good meal for 60 centimes (12 cents). Camouflage garlands are also made by the women. These garlands of green burlap are strung between the trees, in order to break up lines and diffuse edges so that the location of a convoy or battery will not show on an aerial photograph. 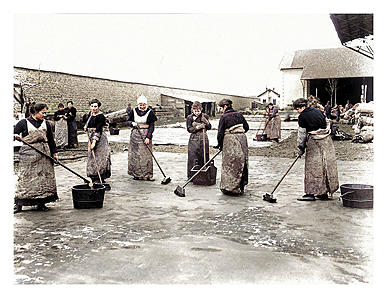 In the carpenter shop huge frames for green umbrellas were being made. The umbrellas open like an ordinary sun-shade, and camouflage a machine gun. In the blacksmith shop the men were turning out steel "cabins" which are sunk below the ground, for an observer. They have a front of bulletproof steel and are about as strong as a small safe. In one of these an observer is safe in the midst of a shower of shrapnel.

Laying on paint much as a scrub-woman wields a mop, an artist was walking about on a gigantic camouflage screen for an airplane hangar. The great piece of painting was spread on a field and covered an area of 1000 square yards. The artist was using a brush as big as a broom.

“Camouflage is making a constant battle against the aerial camera,” said the escort, "for with photographs made from airplanes the enemy gets a complete view of our positions unless they are obscured by some device of camouflage.”

Film of scene described above

The role of American women in WWI camouflage