Above Near the end of World War I, British ship camouflage (called "dazzle painting") increasingly made use of stripes, as shown in this photograph of the HMS Osterley (c1918).

The person most commonly credited with the development of dazzle painting, as a means of camouflaging ships, was British artist and poster designer Norman Wilkinson. His granddaughter is British architect Camilla Wilkinson, who teaches at the University of Westminster in London. Only recently we were delighted to learn that she has published an important scholarly article on her grandfather's contributions to ship camouflage.

Titled Distortion, Illusion and Transformation: the Evolution of Dazzle Painting, a Camouflage System to Protect Allied Shipping from Unrestricted Submarine Warfare, 1917–1918, the article was published in Studia de Arte et Educatione, Number 14 (Krakow, Poland), 2019. Below is a screen grab of the title page, but the entire article can also be accessed online. 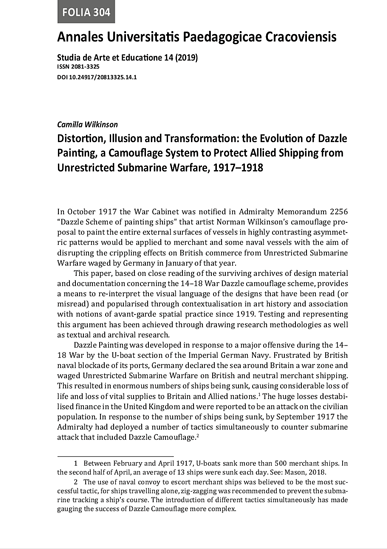