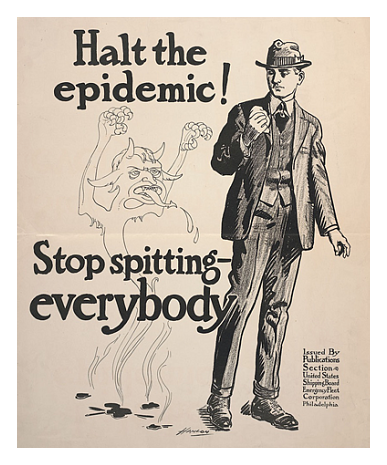 Above A poster issued by the United States Shipping Board Emergency Fleet Corporation (Philadelphia), as a means of controlling the spread of the “Spanish Flu” in late 1918. Source: Free Library of Philadelphia.•

[The flu epidemic] reached Philadelphia by early September 1918, after infected sailors from Boston came to the Philadelphia Navy Yard. Once patients began appearing, it became apparent how ill-informed and ill-prepared the City was. World War I created demands for increased labor at home and doctors abroad. This resulted in overcrowding in the city, and critical shortages of the doctors, hospital space, morgues, and burial services necessary to handle an out-of-control crisis. Accelerating the devastation was the City’s refusal (against the advice of the medical experts) to cancel a rally for the Fourth Liberty Loan Campaign, which brought 200,000 Philadelphians together on Broad Street, on September 28. Within three days (the incubation period of the virus), the number of cases skyrocketed. The epidemic in Philadelphia claimed 16,000 lives altogether, with 12,000 of those deaths occurring in the five-week period immediately following that war bonds rally.

The Spanish flu, also known as the 1918 flu pandemic, was an unusually deadly influenza pandemic caused by the H1N1 influenza A virus. Lasting from February 1918 to April 1920, it infected 500 million people–about a third of the world's population at the time–in four successive waves. The death toll is typically estimated to have been somewhere between 17 million and 50 million, making it one of the deadliest pandemics in human history.…

While systems for alerting public health authorities of infectious spread did exist in 1918, they did not generally include influenza, leading to a delayed response. Nevertheless, actions were taken. Maritime quarantines were declared on islands such as Iceland, Australia, and American Samoa, saving many lives.

Social distancing measures were introduced, for example closing schools, theatres, and places of worship, limiting public transportation, and banning mass gatherings. Wearing face masks became common in some places, such as Japan, though there were debates over their efficacy. There was also some resistance to their use, as exemplified by the Anti-Mask League of San Francisco.

Vaccines were also developed, but as these were based on bacteria and not the actual virus, they could only help with secondary infections. The actual enforcement of various restrictions varied.…

• Thanks to Claudia Covert for alerting us to this image.
Posted by Roy R. Behrens at 8:50 AM