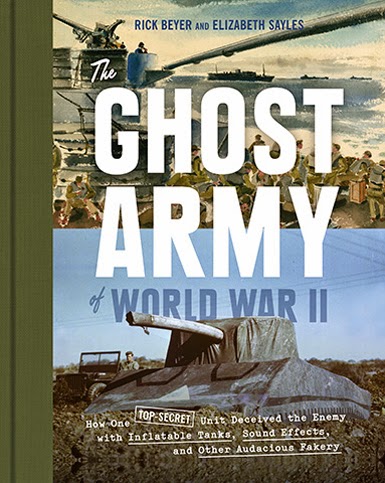 Two years ago, Rick Beyer came out with a documentary film, titled The Ghost Army, which premiered on PBS. It provided a vivid account of a once top secret World War II American Army unit (the 23rd Headquarters Special Troops, aka The Ghost Army), the mission of which was battlefield deception, using sonic and radio confusion, visual camouflage, inflatable decoys, and all sorts of persuasive phony events. The film has been a great success, and it is now being followed by the release of a richly illustrated book about the same unit. Co-authored by Beyer and Elizabeth Sayles (whose father  belonged to the unit), the book is titled The Ghost Army of World War II (New York: Princeton Architectural Press, 2015).

Below is one of the images from the book. It's a Christmas card that was made by one of the artists (unidentified). It makes inventive use of a cut-out silhouette technique that was first introduced by American artist Abbott H. Thayer, in advance of and during World War I. In this case, a silhouette of a soldier has been cut out of the cover, so that the background changes as the card is opened, as underscored by the punchline: "I can't conceal my wish for a Merry Christmas." 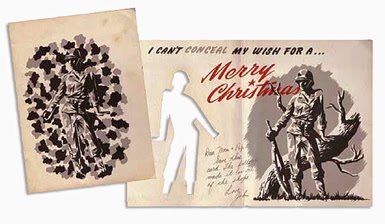 In Thayer's case, he recommended (in a 1918 article) that anyone, even a novice, could produce a functional camouflage pattern, for whatever setting, simply by superimposing a cut-out stencil silhouette on a photograph of the customary background of the subject to be camouflaged. One of his own demonstrations of that is shown below. 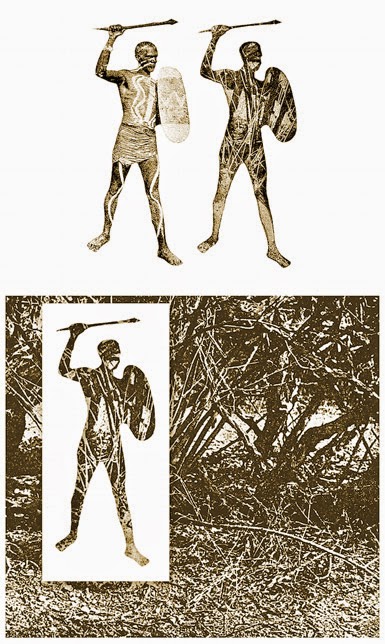