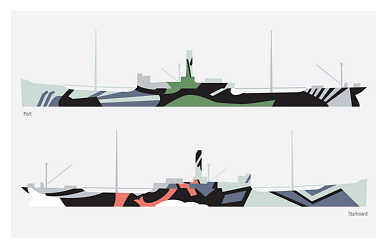 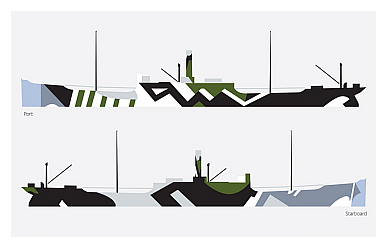 Above and below are a few of the crisp new renderings of WWI dazzle camouflage patterns that are being recreated by Steve Morris, a designer based in Washington DC. We have blogged about his work before.

Work of Famous Camoufleur Will Be Shown In University Hall

William [Andrew] Mackay, camoufleur for the second district of the United States Shipping Board of New York, has sent a number of camouflage models for painting ships to Earl C . Bradbury of the department of art and design.

“Camouflage is becoming more and more a factor in submarine warfare,” said Mr. Bradbury yesterday. “The ships which operate in the zone are being painted to reduce their visibility. We cannot hope to make them entirely invisible, but if their visibility can be reduced one-half an enormous saving in ships would result.”

“Marine camouflage was used in a small way in the Civil War when merchant ships were painted black like warships, with the representation of port holes in white. Today we have far outclassed that method.”

Parts of Ship Are Merged

“The present basic theory in ship camouflagp is the merging of the hull and the upper works with the sea and sky. There are two methods of doing this, the low visibility and the dazzle system. A ship painted battleship gray is less visible than one painted black or white. However the breaking up of the object Into several smaller objects makes it less visible; just as a solid rank of men is more conspicuous than a rank scattered. So a chopny effect of painting the ship seems to suggest sky or sea between the several parts , and thus lowers the chances of the ship being seen.“

“As to the dazzle system which was originated by camoufleur Mackay,” continued Mr. Bradbury, “sunlight is composed of the rays of various colors as illustrated in the rainbow; an object painted in these pure colors would give a suggestion of the light of day which is shut out behind the object. Mr. Mackay found on applying this theory to ship painting that the pure colors blended into the ocean mists at several miles distance, and thus made [peri]scope focusing very difficult.” 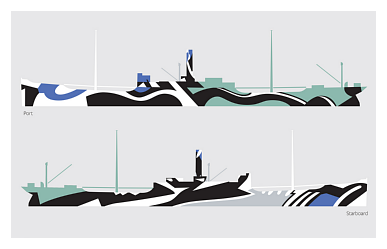 Under the big top at Sims' circus