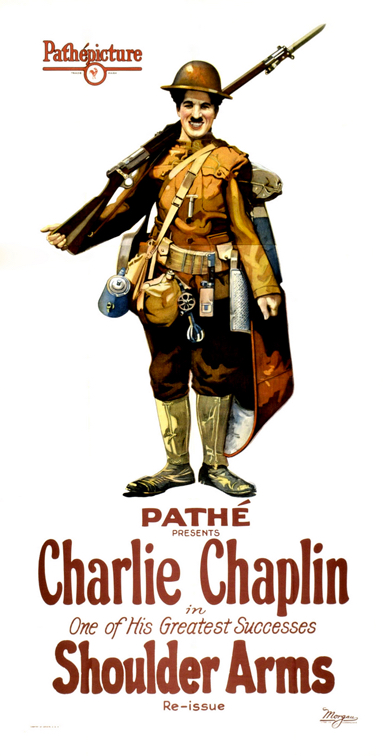 Above Poster for Charlie Chaplin film, Shoulder Arms (1918), in which his character wanders behind enemy lines disguised as a tree trunk. Public Domain.

CAMOUFLAGE: Everybody’s Doing It, Including the Moving Pictures, in Photo-Play Journal (December 1917), p. 25—

No periodical can count its contents complete if it has left out some mention of camouflage. The word has dug its way into our language until it has completely lost its French ancestry. Deception, misrepresentation, cozenage, coggery, ingannation, hocus pocus, thimblerig and artifice, bamboozlement, supercherie, and strategem, they all mean the same nowadays since camouflage has come into its own.

And now the movies have taken it up. They don’t know it yet, but they have. And when the moving pictures begin to take a thing up you have no more chance of getting away from it than you have of not hearing scandal at the Country Club. So why struggle?

If you can recall the day you hid behind the old barn and indulged in your first whiff at a cigarette, you will realize that camouflage meant something to you many years before you ever heard of the blooming word. The old barn was first-class camouflage. If you’re a former little girl, remember the fan you blushed behind when he first said he loved you? ’Twas camouflage that made your face look like a fan. Verily, everybody has been doing it—this thing of camouflaging.…

Cecil B. DeMille, of Paramount [Film Studios], will become a member of the United States Engineer Corps and will aid in recruiting technical experts and scenic artists for camouflage work in France.

According to a Wikipedia biography—

During World War I, the Famous Players-Lasky organized a military company underneath the National Guard called the Home Guard made up of film studio employees with DeMille as captain. Eventually, the Guard was promoted to a battalion and recruited soldiers from other film studios. They took time off weekly from film production to practice military drills. Additionally, during the war, DeMille volunteered for the Justice Department's Intelligence Office, investigating friends, neighbors, and others he came in contact with in connection with the Famous Players-Lasky. He volunteered for the Intelligence Office during World War II as well. Although DeMille considered enlisting in World War I, he stayed in the United States and made films.